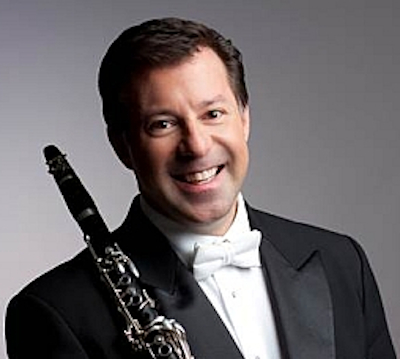 Mr. Williamson is currently a faculty member of DePaul University in Chicago, IL. He has served on the faculty at Columbia University and the Mannes College of Music in New York City, as well as at the Pacific Music Festival in Sapporo, Japan. He has recorded for the Sony Classics, Telarc, CRI, BMG, Naxos and Decca labels and can be heard on numerous film soundtracks. Mr. Williamson was a featured soloist with the CSO under the baton of John Williams, recording his Oscar-nominated score for Steven Spielberg’s film, “Lincoln.”

An avid soloist and chamber musician, Mr. Williamson has performed extensively in the United States, Europe and Asia. He has collaborated with such artists as: James Levine, Yo-Yo Ma, Mitsuko Uchida, Jeffrey Kahane, Anne Marie McDermott, Emanuel Ax, Meliora Winds, Aspen, Dorian and Sylvan Wind Quintets; Brentano, American, Jasper, Brasilia and Dover String Quartets. Past concerto performances of the Mozart Clarinet Concerto are with the Pacific Music Festival Orchestra in Japan (2011), the Metropolitan Opera Orchestra in Carnegie Hall under conductor Fabio Luisi (2012) as well as with the CSO and Maestro Riccardo Muti in February and June, 2016.

Mr. Williamson recently performed the Mozart Concerto with the CSO and Maestro Muti in five performances on their west coast tour of California. In the upcoming CSO (2020-21) season, he will be performing the Copland Concerto and the Bernstein Prelude, Fugue and Riffs with Maestro Bramwell Tovey.

He received his Bachelor’s degree and Performer’s Certificate from the Eastman School of Music, and his Master’s degree from the Juilliard School. As a Fulbright Scholar, he furthered his studies at the Hochschule der Künste in Berlin, where he collaborated with various members of the Berlin Philharmonic. His past teachers include Peter Rieckhoff, Charles Neidich, Kenneth Grant and Michael Webster. Mr. Williamson was the grand prize winner of the 1994 Boosey & Hawkes/Buffet Crampon First Annual North American Clarinet Competition.

Other past awards include the Concert Artists Guild Competition as well as the Coleman International Chamber Music Competition. Mr. Williamson recently was selected to adjudicate for the XVI Internation Tchaikovsky Competition. This was the first time that woodwinds and brass were added to the competition.

“My goal is to help you develop your own unique voice and to achieve the highest level of artistry.”