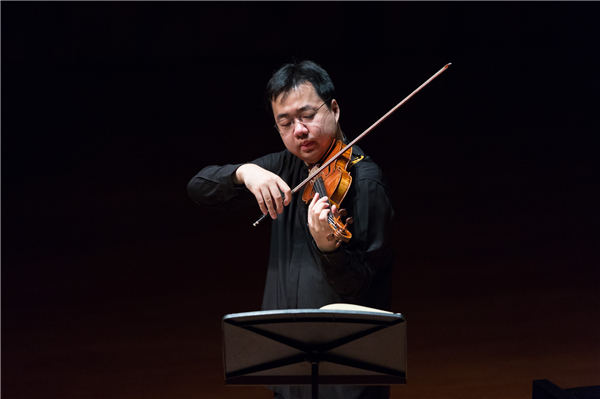 Ning Feng is recognised internationally as an artist of great lyricism, innate musicality and stunning virtuosity. Blessed with an impeccable technique and a silken tone, his palette of colours ranges from intimate delicacy to a ferocious intensity. The Berlin based Chinese violinist performs across the globe with major orchestras and conductors, in recital and chamber concerts.

Recent successes for Ning Feng have included a return to Budapest Festival Orchestra with Iván Fischer in Budapest and on tour to China performing Dutilleux L’arbre des songes, tours with the Hong Kong Philharmonic Orchestra and Jaap van Zweden to Europe, Asia and Australia, a tour to China with the Konzerthausorchester Berlin and Lawrence Foster as well as successful debuts with the Los Angeles Philharmonic and Xian Zhang, National Symphony Orchestra and Gianandrea Noseda and BBC Philharmonic Orchestra and Simone Young. In recital and chamber music Ning Feng performs regularly with Igor Levit, amongst others, at many of the world’s major festivals and concert venues.

Highlights of Ning Feng’s 2019/20 season include returns to the Budapest Festival Orchestra with Iván Fischer, the City of Birmingham Symphony Orchestra with Osmo Vänskä, the New Jersey Symphony Orchestra with Xian Zhang and the Hong Kong Philharmonic Orchestra with Yu Long.He will be giving his debuts with the Helsinki Philharmonic Orchestra, the BBC National Orchestra of Wales and the Amsterdam Sinfonietta with whom he will perform Henze Violin Concerto No.2. New to his repertoire will also be the Goldmark Concerto which Ning Feng will be performing with the Royal Philharmonic, China Philharmonic and Shanghai Symphony Orchestras, all under the baton of Yu Long.Chamber music highlights include Ning Feng’s return to the Schubertiade Festival for duo recitals with Igor Levit and chamber music concerts at Cologne Philharmonie and for the Barbican Centre in London. He will also be performing a number of solo Bach recitals marking the 300th anniversary of Bach’s completion of his solo sonatas at the Hong Kong Arts Festival and elsewhere.

Ning Feng records for Channel Classics in the Netherlands and his new disc ‘Virtuosismo’ featuring Paganini Violin Concerto No.1 and Vieuxtemps Violin Concerto No.4 will be released in September 2019. His earlier recording of Bach’s complete solo works for violin was hailed by Gramophone as “unlike anyone else’s… it’s the illusion of a freewheeling conversation projected from within that held me captive.” Further discs include recordings of the Elgar and Finzi Violin Concertos with the Royal Liverpool Philharmonic Orchestra, the Tchaikovsky Violin Concerto and Bruch Scottish Fantasy with the Deutsches Symphonie-Orchester Berlin, ‘Apasionado’ with the Orchestra Sinfónica del Principado de Asturias featuring works by Sarasate, Lalo, Ravel and Bizet/Waxman, two releases with the Dragon Quartet featuring string quartets by Schubert, Dvořák, Borodin, Shostakovich and Weinberg and two CDs of violin solo repertoire.

Born in Chengdu, China, Ning Feng studied at the Sichuan Conservatory of Music, the Hanns Eisler School of Music (Berlin) with Antje Weithaas and the Royal Academy of Music (London) with Hu Kun, where he was the first student ever to be awarded 100% for his final recital.The recipient of prizes at the Hanover International, Queen Elisabeth and Yehudi Menuhin International violin competitions, Ning Feng was First Prize winner of the 2005 Michael Hill International Violin Competition (New Zealand), and in 2006 won first prize in the International Paganini Competition.

Ning Feng plays a 1721 Stradivari violin, known as the ‘MacMillan’, on private loan, kindly arranged by Premiere Performances of Hong Kong, and plays on strings by Thomastik-Infeld, Vienna.

“Online interactive music teaching has become more and more popular along with the development of the faster internet connection and more advanced equipments, it will be a very important part of the musical education in the future, it breaks the barrier of different regions and bring lots of new opportunities. It’s such a pleasure for me to be a member of the Virtumasterclass team, with such a group of fantastic musicians around the world, I am certain that we will present an unique leaning experience for all the participants.