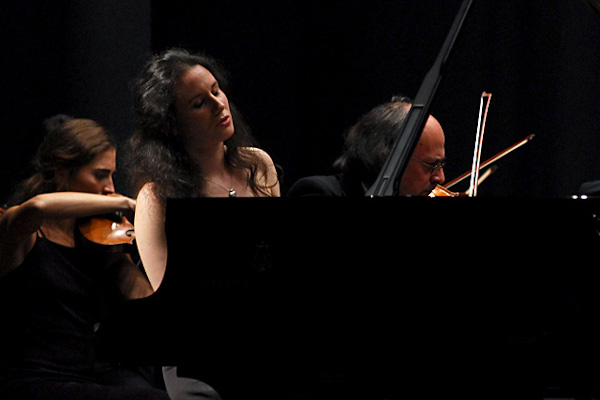 After graduating at the Music Academy in Zagreb, Martina Filjak completed her studies at the Vienna Conservatory and at the Hanover University of Music, Drama and Media.She also attended master classes at the piano academy in Como.

After her debut CD with sonatas by Antonio Soler and a chamber music recording with the cellists Jan Vogler and Christian Poltéra, which was released by Sony Classical in 2013, her second solo CD with works by Schumann, Bach / Liszt and Skrijabin was released in autumn 2016 at the label Solo Musica. On January 10, 2020 the new album “Light & Darkness” was released by the label Profil Edition Günter Hänssler.

In the 2019/2020 season, Martina Filjak as a soloist focuses on projects like her recitals at Palau de la Música in Barcelona, the Tbilisi Piano Festival, the Piano Festival Cristofori in Padova and her return to the Dubrovnik Summer Festival.She cooperates with orchestras like the Royal Camerata at the George Enescu Festival in Bucharest, the Chor des Bayerischen Rundfunks and Münchner Rundfunkorchester at the Vatoslav Lisinski Concert Hall in Zagreb or the orchestra of the Theater für Niedersachsen in Hildesheim and Goslar.She performs with the Bilbao Symphony Orchestra as well as the Bogota Philharmonic Orchestra and plays solo within the “Cycle of Great Pianists” in the Teatro Municipal Santiago de Chile. Additionally, Martina Filjak tours through several German cities performing chamber music with renowned horn player Felix Klieser.

Future projects include appearances at the Stift music festival in the Netherlands and concertos along the Bremen Philharmonic and Michael Schonwandt as well as the Kansas City Symphony and Michael Stern.

As a recepient of various awards in her native Croatia, Martina takes pride of being awarded the ‘Vladimir Nazor’ prize, the ‘Milka Trnina prize’ of the Croatian association of musical artists, ‘Orlando’ prize for her performance at the Dubrovnik Summer Festival, the ‘Judita’ prize for her performance of Dora Pejacevic’s Piano concerto at the Split Festival. In 2009 she was honored by the President with the ‘Red hrvatskog pletera’ for the international achievements.

Her special passion for chamber music shows in the collaboration with top-class partners such as the Szymanowski Quartet, the Amaryllis Quartet, the Ensemble Berlin, as well as Dmitry Sinkovsky, Radovan Vlatkovic, Felix Klieser, Monika Leskovar and Tatjana Vassiljeva.

Martina Filjak’s large repertoire ranges from Bach to Berio and includes more than 30 piano concertos. In addition, she is committed to researching less well-known piano literature and various concert formats.

The artist lives in her adopted home of Berlin, loves to travel and speaks seven languages.

“Performing music for me is about reaching and maintaining this very precious yet sensitive precious balance, the balance between the heart, the mind and the body. Just like in life, our work and our communication in music requires constant attention. Uniting the knowledge of performing at soloist recitals, as a soloist with orchestras and as chamber musician into teaching is another privileged task that allows for a deeper musical communication and better understanding of music.”