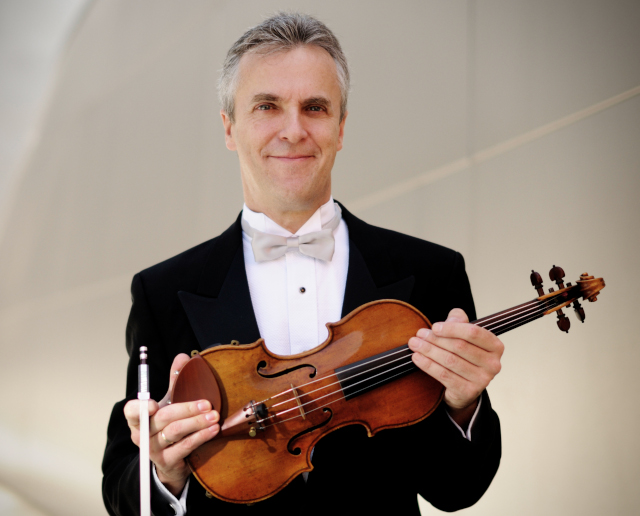 MARTIN CHALIFOUR began his tenure as Principal Concertmaster of the Los Angeles Philharmonic in 1995. Working closely with Gustavo Dudamel and even partnering with him in chamber music and concertos, Chalifour is proud of being part of a bright new era for the LAPhil , recently hailed “America’s most important Orchestra” by the New York Times. He graduated with honors from the Montreal Conservatory at 18 and then pursued studies at the Curtis Institute of Music.

Chalifour received a Certificate of Honor at the Tchaikovsky Competition, and is also a laureate of the Montreal International Competition. Apart from his Philharmonic duties he maintains an active solo career, playing a diverse repertoire ranging from baroque to contemporary commissions.

He has appeared as soloist with conductors Pierre Boulez, Gustavo Dudamel , Charles Dutoit, Christoph Eschenbach, Sir Neville Marriner, and Esa-Pekka Salonen. Outside the U.S., he played solo with the Auckland Philharmonia, the Hong Kong Philharmonic and the National Orchestra of Taiwan, among others.

Mr. Chalifour is a frequent guest at several summer music festivals, including the Sarasota Festival and the Mainly Mozart Festival. He records for the Telarc, Northstar and Yarlung labels. His latest album features a Mozart concerto recorded live with Neville Marriner and the Los Angeles Philharmonic.

“Expressivity is key in delivering the most effective musical line. The impact on the listener is greatly enhanced if the artist searches way beyond the score, to find the necessary colors and phrasing to make the music come alive!”