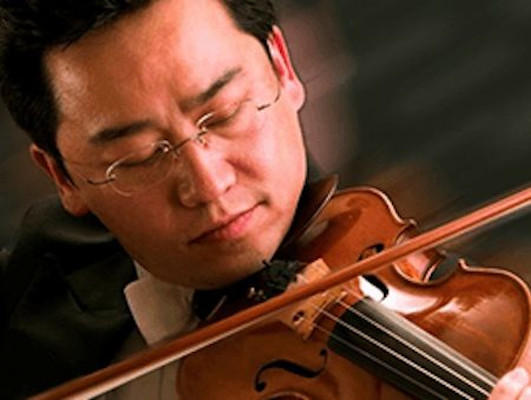 JUN YI MAORCHESTRA DIRECTORAND CONCERTMASTER –OPERA AUSTRALIA ORCHESTRA “It is with great joy that I welcome Jun Yi Ma as Concertmaster and Artistic Advisor of the Australian Opera and Ballet Orchestra. His demonstrated passion for the operatic art form and for this orchestra is inspiring for everyone who has the privilege of working with him. Jun’s appointment is a shining example of the extremely high standard of musicianship nowbeing demonstrated by the Opera Australia Orchestra.” said Lyndon Terracini, Artistic Director of Opera Australia. Jun Yi Ma was born in Shanghai in 1972 and began violin studies at the age of six with Professor Ding at the Shanghai Conservatorium.At nine he gave his first televised performance in Shanghai.Three years later he performed at the White House as ‘Little Ambassador’, representing the Chinese Government for the President of the United States, Ronald Reagan.The renowned violinist Jascha Heifetz was also present at this performance and then took Jun on as a student. In addition to playing for Ronald Reagan, Junhas also played in Australia for two other US Presidents, George H. Bush and Bill Clinton, as well as three Australian Prime Ministers, Bob Hawke AC, GCL, Paul Keating and John Howard OM, AC.

In 1990 he was appointed inaugural Concertmaster of the Asian Youth Orchestra and then Concertmaster and soloist with the Australian Virtuoso Chamber Orchestra in 1992.He pursued further studies at the Tasmanian Conservatorium of Music with Professor Jan Sedivka, and at the Sydney Conservatorium with Charmian Gadd. He has also studied with Jascha Heifetz and participated in a masterclass with celebrated teacher Dorothy DeLaywho also taught Nigel Kennedy.