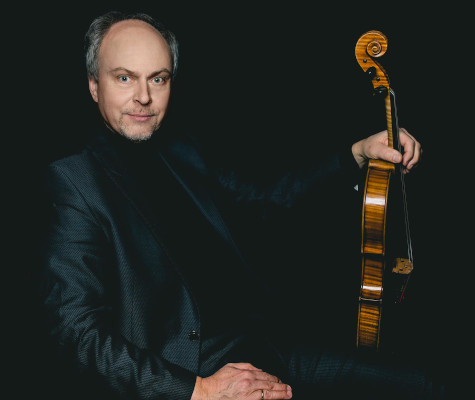 Hartmut Rohde is one of the leading and most sought-after European violists renowned for his stylistic versatility and rhetorical perceptiveness. He delights the public with his special timbres and highly lively interpretations which are always an affective and electrifying illumination of the score. A main interest for him lies in the historical scrutiny of the different musical styles. Perspectives and new experiences in musical dialogue serve as the basis of his interpretations. Following successful performances of concertos by Walton, Hindemith, Mozart and the arrangement of the concerto by Edward Elgar, the premiere of Gehra’s viola concerto with Reinhard Goebel proved to be an undertaking of utmost importance in recent years. Hummel’s Fantasie and the enthralling Andante and Hungarian Rondo by Carl Maria von Weber resounded in the Düsseldorf Tonhalle. The English Symphony Orchestra is planning a world premiere of Philip Sawyers’ viola concerto in London in 2021 as well as a CD recording of Josef Tal’s viola concerto in collaboration with Deutschlandradio Kultur. Solo performances currently take him to Brazil and Lithuania.

As a chamber musician, Hartmut Rohde regularly concertizes in Australia, USA, Canada, South America, Israel, Europe and Switzerland. Numerous competition awards form the basis for international concert activity both as a soloist and as a chamber musician. Chamber music partners include Heinrich Schiff, David Geringas, Lars Vogt, Daniel Hope, Janine Jansen, Arto Noras, Patrick Gallois, Jörg Widmann as well as the Auryn Quartet and the Artis Quartet, among others. The violist is also a founding member of the Mozart Piano Quartet, which remains known as one of the world’s leading piano chamber music ensembles. Not long ago, the quartet received the newly-created OPUS Klassik Award in October 2018. They will tour Asia, South America and the USA from 2019-2021, appearing in their most important music centers.

From 2013-2017 he was the conductor and artistic director of the Leopoldinum Chamber Orchestra Wroclaw. Worthy of note, the label cpo recently released highly-acclaimed CDs with works by Laks, Jarnach and Erich Wolfgang Korngold. Further conducting has taken him to the Biel Symphony Orchestra, Lemberg Symphony Orchestra, Cervo Summer Academy, Aurora Chamber Orchestra Sweden, and the Klaipeda Chamber Orchestra. He has given guest concerts in the Berlin Philharmonic, the Tonhalle Düsseldorf, at the Wratislawia Cantans Festival, and at the Casals Festival in France. With the Franz Liszt Chamber Orchestra Budapest and the Hamburg Camerata, he will conduct concerts in 2019 in the Konzerthaus Vienna and the Hamburg Musikhalle, among other places. A recording of Hans Gal’s piano concerto will be released in 2020 again with cpo. In September 2019, Rohde appeared as a guest conductor and soloist at the opening of the festival for new music with the Klaipeda Chamber Orchestra. In November, Rohde conducted Beethoven’s 2nd Symphony and Mozart’s Magic Flute Overture with the Orquestra Filharmonica Projeto in Sao Paulo. Brahms’ second symphony will be the central work of the year 2021.

After his early studies with Christian Pohl and Prof. Hatto Beyerle, he soon became known as one of the most successful European teachers. He has been a professor at the Berlin University of the Arts since 1993, and is also an honorary member of the Royal Academy of Music in London. His students’ successes include leading positions with the Berlin and Munich Philharmonic, with all radio orchestras, the Leipzig Gewandhaus, London, Paris, Rome etc. as well as numerous prizes in competitions such as Banff, ARD Munich, Young Concert Artists NY, Mendelssohn Competition, Brahms Competition, Geneva competition and also include ECHO Klassik Prize winners. He is the artistic director of the International Max Rostal Competition Berlin.

“Education is not filling barrels, but lighting flames.”