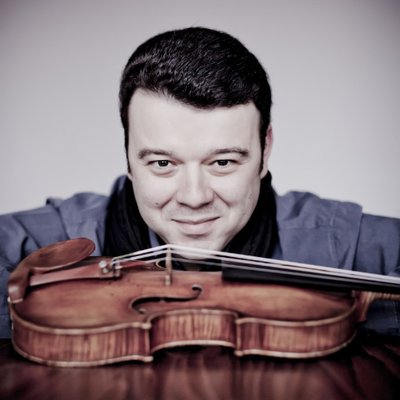 Universally recognized among today’s top performing artists, Vadim Gluzman brings to life the glorious violinistic tradition of the 19th and 20th centuries. Gluzman’s wide repertoire embraces new music and his performances are heard around the world through live broadcasts and a striking catalogue of award-winning recordings exclusively for the BIS label.

as well as UK premiere of Sofia Gubaidulina’s Triple Concerto with BBC Philharmonic under Omer Meir Wellber.He has given live and recorded premieres of other works by Sofia Gubaidulina, as well as Giya Kancheli, Elena Firsova, Pēteris Vasks, Michael Daugherty, and most recently Lera Auerbach.

Born in the former Soviet Union in 1973, Gluzman began violin studies at age 7.He studied with Roman Šnē in Latvia and Zakhar Bron in Russia before moving to Israel in 1990, where he became a student of Yair Kless.In the United States, he studied with Arkady Fomin in Dallas and at the Juilliard School with Dorothy DeLay and Masao Kawasaki. Early in his career, Gluzman enjoyed the encouragement and mentorship of Isaac Stern which continued until Stern’s passing in 2001.

Mr. Gluzman serves as Distinguished Artist in Residence at the Peabody Conservatory in Baltimore and teaches at the Keshet Eilon International Music Center in Israel.He performs on the legendary 1690 ‘ex-Leopold Auer’ Stradivari on extended loan to him through the generosity of the Stradivari Society of Chicago.

“Music making is about sharing – we share our emotions, our thoughts and feelings with the public.So is teaching – we share our knowledge and experience with younger generation of musicians.For me, the two are indivisible parts of being an artist.”