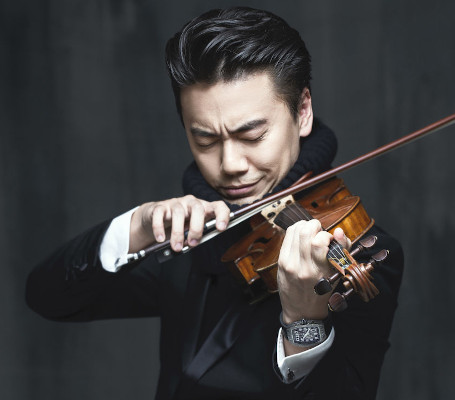 Critically acclaimed Canadian violinist Jing Wang is one of the most versatile and dynamic violinists of his generation.Since his solo recital debut in Marseilles, France at the age of six, Wang has garnered prizes in top international competitions, including the first prize at the 2007 Irving M. Klein International Strings Competition.In 2003, Wang was awarded the “Young Soloist of the Year” by Les Radios Francophones Publiques, a broadcast network of four countries including France, Canada, Switzerland, and Belgium. As a part of the award, Wang’s first CD album including works by Beethoven, Ravel and Gershwin was released in Europe and Canada.

Wang’s chamber music performances and solo recitals at major venues, such as National Arts Centre in Ottawa, and Lincoln Center, received critical acclaim and his performances are heard frequently on CBC Radio-Canada. Additionally, Wang is one of the founding members of Ensemble75, a chamber music series based in Dallas, Texas.

Under Maestro Graeme Jenkins, Wang was the Concertmaster of the Dallas Opera from 2010-2013.He previously served as guest Concertmaster for the Kansas City Symphony with Michael Stern, the San Antonio Symphony with Sebastian Lang-Lessing, and most of the major symphony orchestras in Asia such as the Singapore Symphony and the KBS Symphony. Appointed by Maestro Jaap van Zweden, Wang is currently Concermaster of the Hong Kong Philharmonic since 2013.He plays a 1760 G.B. Guadagnini violin, a loan arranged by the Y. S. Liu Foundation.

“As early as humanity was documented, Plato said that rhythm and harmony find their way into the inward places of the soul. It is now every musician’s mission to find the perfect balance and make this a lifelong mission.”